Braylin* has been struggling with Non-Traditional Instruction, and frustration led her to the Behavior Intervention Specialist’s office recently. She and Ms. Micah were going to talk through some of the issues she was having when Braylin saw a magazine on the desk.

“That looks just like you,” Braylin said to Ms. Micah as she studied the beautiful woman on the cover. 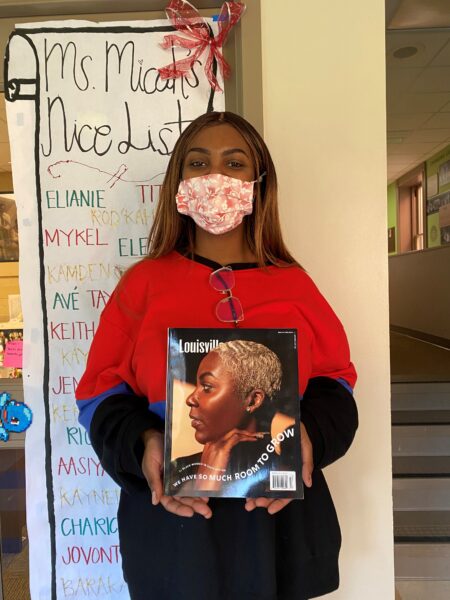 Braylin opened the magazine as Ms. Micah and The Patch’s JCPS substitute teacher watched. They had both experienced the difficulty that Braylin had with reading. She was far behind her grade level, and she declared repeatedly that she hated reading. Nevertheless, she began to read.

Ms. Micah was included in a Louisville Magazine feature story titled “We Have So Much Room to Grow.” It included interviews with 26 Black women talking about their lives. No one could hold back tears as she read some of the quotes aloud:

“What gives me hope is that I have a daughter coming into the world”
“Almost anything can make me laugh”
“I just knew I was going to shake up this world.”

Thank you for supporting The Patch, where Braylin can find inspiration in the role models on staff, in her fellow students striving for greatness, and even in the pages of a magazine. Sometimes, all a child needs to form a love of learning is the right subject.